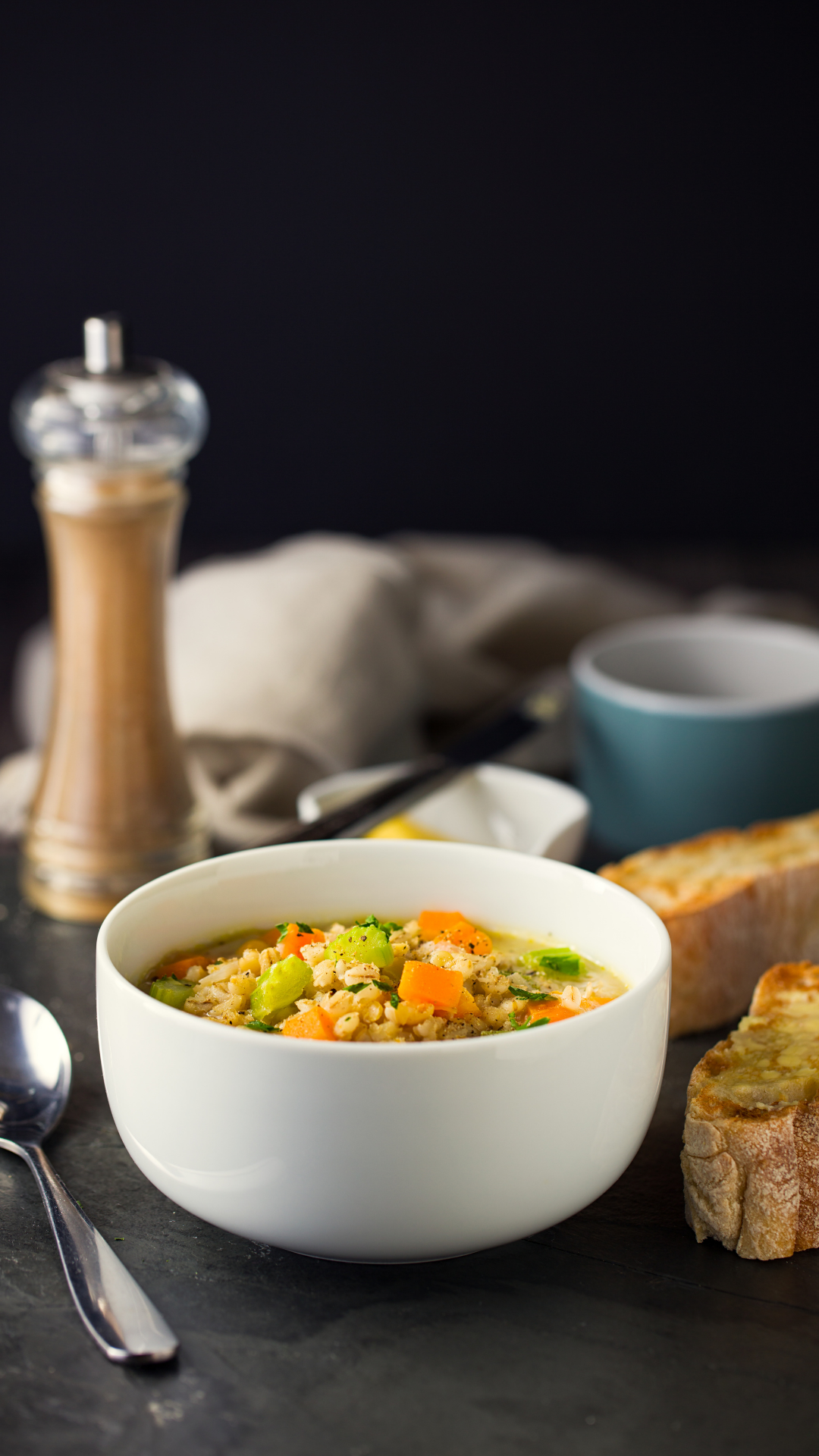 How To Make Hearty, Healthy Scotch Broth With Kale

Scotch Broth is a classic Scottish soup often served as a starter or simply on its own with a wedge of buttered bread for lunch. Scotch Broth is a cheap, easy, healthy soup packed with nutritious vegetables. Scotch Broth is traditionally made with mutton but this is a vegetarian version, made hearty with pearl barley and savoury kale. This simple soup is a stalwart of Scottish cookbooks and should keep you warm on a winter’s day!

Why Is Vegetarian Scotch Broth So Good?

Scotch Broth is a staple of any Scots diet. Alongside Cock-a-leekie its one of our best-loved soups. If you’ve ever attended a Burns Supper or any Scottish celebration it’s probably been the starter.

Scotch Broth became popular because it’s a filling and cheap way to feed large families. The vegetables and barley are full of vitamins – plus its super tasty!

Make a big pot of this vegetarian Scotch Broth and it’ll feed you all week.

What Is The Traditional Recipe For Scotch Broth?

Traditionally, Scotch Broth wasn’t vegetarian. Neck of mutton was often the favoured meat used to flavour the soup but some recipes use beef stock. Pearl barley and dried peas, alongside carrots, tatties (potatoes) and neeps (turnips) are mainstays.

Growing up our Scotch Broth was often made without meat. The addition of kale keeps the dish classically Scottish and adds a yummy moreish flavour. You can add vegetable stock to create a warmy, veggie broth that keep you cosy all winter.

What Do I Need To Make This Vegetarian Scotch Broth Recipe?

Do I Have To Soak The Broth Mix?

Soak the broth mix in cold water overnight for best results. If you forget try boiling the mix in water for 20 minutes then leave to soak for a couple of hours. If you don’t soak the mix then your soup with be crunchy. The soft, stodgy texture is part of what makes Scotch Broth unique and delicious.

Kale belongs to the cabbage family. It’s certainly at home in Scotland, built to withstand hard frosts and bitter winters! It was a staple of Scottish cooking but fell out favour until recently. Now celebrated for its health properties, kale is firmly back on the menu and adds a dash of green to liven up the plate.

I Don’t Have Kale, Can I Use A Substitute?

If you can’t find kale (though most UK supermarkets stock this leafy green), savoy cabbage, spinach or parsley will add colour, nutrients and a wholesome flavour to your soup.

Can I Switch Up The Vegetables?

My traditional recipe will always include onions and carrots – it’s a Scotch Broth non-negotiable! If you want to include other additions turnip, parsnip and peas are great nutritional extras!  Personally, the more vitamins in the form of vegetables you can pack into a winter soup the better! It’s definitely a firm favourite of Clootie HQ customers.

How Many Portions Does This Vegetarian Scotch Broth Recipe Make?

This recipe will feed 8-10 people with big appetites!

Our Vegetarian Scotch Broth recipe is quite thick due to the quantity of vegetables and pulses. You can thin the soup out by adding extra water. If you prefer a thick broth then simply use less stock or more barley mix.

If you plan to add a turnip to your broth my grandparents’ generation always swore by a ‘frosted neep’. If it’s wintry out, then try leaving your turnip on the doorstep the night before you make your Scotch Broth. Granted the frost will make the neep (turnip) harder to cut but the cold adds a delicious sweetness to this tough vegetable!

How Long Does Scotch Broth Keep?

Scotch Broth will keep in the fridge for up to 5 days. It will be quite thick by this point so you may need to add extra water.

You can also freeze Scotch Broth, making it the perfect recipe for batch cooking. Once cool, ladle the soup into tubs suitable for the freezer. It should keep for up to 6 months. Defrost the night before best results.

Though we’d love to serve everything with a side of clootie dumpling, Scotch Broth is a hearty meal in itself. A slice of buttered, crusty bread is the perfect accompaniment or serve with toasties for a fuller meal.

Rinse the broth mix and soak in cold water for at least 2 hours but preferably overnight. Drain and rinse well.

Heat the oil in a large pan and fry the onion, turnip, carrots and celery for 10 mins until soft. Season with salt and pepper.

Add stock to the pan and simmer. Now stir in the broth mix and let the soup bubble away until the pulses are soft. Lastly add a generous scattering of kale and cook for a further 10-15 minutes.

Serve with crusty bread and butter for a warming lunch.