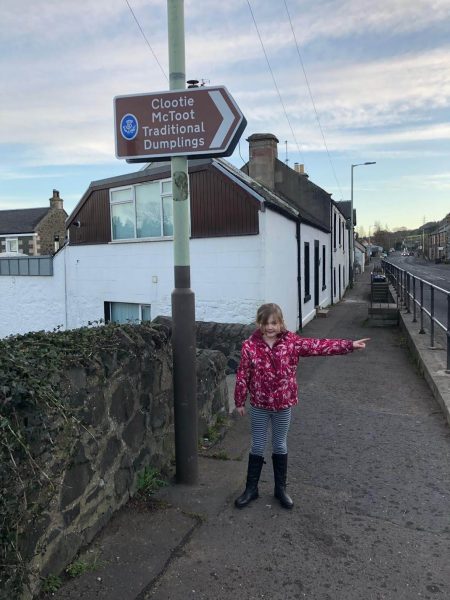 Abernethy is a truly ancient village whose history can be traced back over more than two thousand years. It guards any landward approach to Fife from the north and lies just off the A913. Today it is a quiet and attractive village with interesting wynds, a fascinating story to tell and home to Clootie McToot HQ.

The Abernethy round tower stands approximately 22 m high, and access to the top, from which there is a superb view, is by means of a modem spiral stair.
The stonework used at the bottom of the tower is remarkably similar to that used for St Rule’s Church, St Andrews and both may come from the same source, possibly by sea as land transport from a common quarry is highly unlikely at this early date.

It is probable that Abernethy was a place of some importance throughout the Dark Ages. It is mentioned in the margin of one of the surviving copies of the Pictish king-list and some scholars believe that the king-list may have been compiled here in some vanished Pictish monastery, perhaps related to the tower.
Several early carved stones have been found in the vicinity, including the Pictish symbol stone now set against the wall of the tower, beside the gate into the churchyard. This is a 7th century stone, incomplete but bearing four sharply incised symbols: a ‘tuning fork’ flanked on either side by a hammer and anvil, and below a crescent and V-rod. Alongside is a metal collar, or jougs, by which offenders were chained as punishment in medieval times.

A fantastic ancient wee village with lots to see and do.

OUR RECIPE: A Scottish Sweetie!